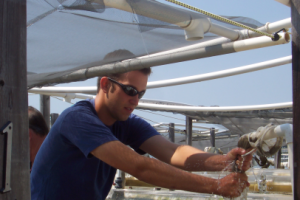 I wanted to share a post by my friend Sharon Baruch-Mordo at my other blog, BioDV, on communicating biodiversity science. Sharon is a thoughtful, insightful scientist and I think she makes some really awesome points.

In her article, she challenges readers to, “write a 500 word essay about your science for a popular media outlet.” Never one to back down from a challenge, I thought I would give it a shot. My effort is below (499 words!)…what do you think Sharon?

Why we need to rethink the term “biodiversity”

Biodiversity. For most people, it conjures up images of lush rainforests and teeming coral reefs. Exotic locales where life abounds in its infinite forms.

For me, it brings to mind a whole different world. Buckets. Mesh. Plumbing tools. One of my hats is experimental ecologist, and for my degree, I study biodiversity. I’m interested in what happens after we lose species, and what that means for things that we care about, like food and clean water. To answer this question, I create miniature communities in buckets, introduce different numbers of species, and see what happens.

But lately, I’ve been re-thinking the whole concept of biodiversity. For many people, biodiversity means the number of species in a community. But this is a little misleading. Let me give you an example. Consider a tidepool with a crab, a fish, and a bird. Now, think of another tidepool with three different species of snails. Which is more diverse?

If you said the tidepool with a crab, a fish, a bird, you’re not wrong. But scientists like to count things, and when we count the number of species, we consider both communities to be equally diverse. Why? Because they each have three species. Our standard concept of diversity doesn’t incorporate differences like wings or gills or claws, but simply whether individuals are the same or different.

So why do we need to reconsider biodiversity? For the same intuitive reason why you answered the community with the crab, the fish, and the bird: we know diversity is painted in shades of grey. In other words, organisms can vary by degree: two birds are closer in terms of what they do, and how they do it, than either is a crab. And this variation needs to be reflected in our notion of diversity.

So how do we go about doing this? There are a few ways. First, we can measure aspects of the organisms that relate to what they do, what they eat, and where they live. Then we can consider how species in a community share or do not share these traits. Second, we can consider their evolutionary relationships: in other words, how they are related. Species that are more distantly related often look and function differently (think the two birds and the crab).

What are the benefits of rethinking biodiversity? Diversity has been shown to enhance many ecosystem services that we value, like fisheries yields and water clarity. So, protecting biodiversity is important to preserving our way of life.

But as we have considered, might we be protecting one kind of biodiversity at the expense of another?

The answer may not be clear: there are lots of reasons to conserve communities beyond diversity. But I would argue that rethinking diversity is the right step towards better understanding and protecting our natural world.

One thought on “Taking the biodiversity challenge”

Error: Twitter did not respond. Please wait a few minutes and refresh this page.